Gas hydrates are a crystalline combination of water and methane that form under the temperature and pressure conditions of the seafloor in deepwater environments. The crystalline structures form ice-like plugs that can block the choke or kill lines and interfere with blowout preventers (BOP’s), especially in well control situations or extended trips out of the hole. The addition of salt and other thermodynamic hydrate suppressors to the aqueous phase of drilling fluids lowers the temperature and raises the pressure at which gas hydrates form, thereby shifting the optimal temperature/pressure combination away from those found at the seafloor of the deepwater environment. In synthetic-based fluids, maintaining a strong emulsification of the calcium chloride brine is generally sufficient to suppress gas hydrates. But at times, a water-based drilling fluid is the optimal system choice. Newpark’s high-performance water-based drilling fluid system for deepwater environments, the DeepDrill system, employs both supplemental salinity and non-ionic polyol technology for the suppression of gas hydrates. 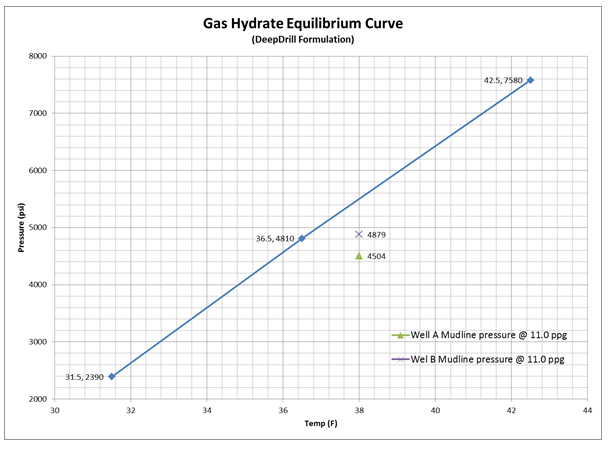