Topping Out at New NDF Facility 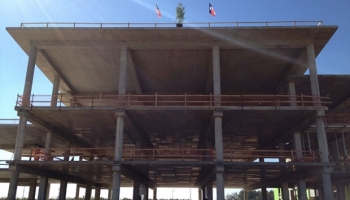 On November 16th, a group of Newpark company representatives helped celebrate a significant milestone with construction crews and suppliers at our new Newpark Drilling Fluids facility in Katy - the "Topping Out" milestone.

"Topping Out" is a term used in the construction industry to indicate a significant point in the progress of construction: the highest point of the building is in place and crews are now closing in the structure, with interior work set to begin. This is the phase in which a live tree is often placed at the highest point of a building's framework, and our construction crews added Texas and American flags to make the symbolic tree even more visible. During the celebration, Newpark representatives described our company and our services, to give workers an idea of the type of work we do and the contributions we make to the oil and gas industry. Company officials from construction company Synchro thanked the many suppliers and crews who have contributed to the project being on schedule. And, with safety at the core of everything we do, Newpark representatives were very pleased to hear that there have been no lost-time incidents through 50,000 man-hours of labor -- an excellent achievement on a project of this scope and size. Construction workers were treated to lunch, and Newpark representatives toured the entire facility.

When completed in mid-summer 2013, the state-of-the-art facility will serve as a global showcase for Newpark innovation, featuring a drilling simulator, research & development laboratory, field services laboratory, and other advanced technology.

The facility is located north of I-10 on Mason Road in Katy, TX. Watch a time-lapse video of the construction here and read more about the facility here.