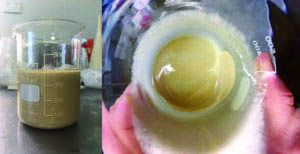 The KRONOS fluid underwent a 14-hour beaker test at the operator’s request. The test showed that the mud weight remained at 1.22 sg, with minimal residue after the contents were poured out. The fluid was eventually deployed to help drill the intermediate section of a deepwater well in Australia where a narrow equivalent circulation density margin was anticipated.

During the exploration phase of a deepwater prospect offshore Australia, the formation evaluation program uncovered a narrow equivalent circulation density (ECD) margin in the intermediate section that required a mitigation strategy. To allow access to the reservoir with minimal risk due to the narrow ECD window, the project team assessed different solutions from both a drilling and fluids perspective. Ultimately, they selected a low ECD, flat-rheology fluid system that was able to stay within the narrow margin while maintaining 100% cuttings transport efficiency.

The majority of wells drilled offshore Australia are in water depths less than 500 m. In recent years, there has been increasing activity further off the continental shelf in water depths of approximately 1,000 m. The general default for operators under these conditions are to use an aqueous fluid, unless anticipated technical challenges would justify the use of a non-aqueous fluid (NWBM). In addition, Australia requires that an environmental plan be submitted to the governmental regulatory body, which includes not only the proposed fluid design but also comprehensive evidence supporting that particular fluid selection.

Why an NWBM for Deepwater?

Narrow-margin drilling has always been a challenge for operators around the world. The low-ECD Kronos system was designed to minimize pressure losses and optimize flow rates by lowering the overall rheology characteristics and minimizing sag potential over a wide range of pressures and temperatures. The system features suitable suspension characteristics to effectively clean the wellbore while maintaining the ECD within the required pressure window.

The fluid is a synthetic-based invert emulsion system, designed primarily to comply with the environmental requirements for using NWBMs in deepwater, in this case Australia.

The operator of the project was developing three separate fields in Australia and had selected an aqueous fluid for all sections except for one field. This field, where the first three of the five wells to be drilled were located, had an intermediate section where a risk assessment deemed the use of an NWBM to be necessary, even though it was inconvenient.

Both conventional and flat-rheology NWBMs were considered in initial discussions.

As was anticipated, the conventional NWBM formulation had a rheology profile that exhibited a large variation at different temperatures. The operator determined that this would increase the risk of pressure spikes across the relatively weak formation, while also contributing to hole-cleaning, ECD and barite sag issues in the highly deviated sections being drilled.

The Newpark Technology Center in Houston was then contacted to provide the operator with a solution, and they delivered a flat-rheology Kronos report showing positive results of the fluid’s initial testing.

As part of additional stress testing of the design requested by the operator, Newpark then ran a beaker test, which was a simple barite sag test on a batch of the fluid left in a beaker for 14 hours. The test showed that the mud weight remained at 1.22 sg, with minimal residue after the contents were poured out.

During loadouts, samples were sent to the lab for additional checking, including applying additional shear using a Silverson mixer at 6,000 rpm for 1 hour to predict the potential final rheology profiles.

During both the testing and the actual drilling with the flat-rheology fluid, communication was constantly maintained between Houston and Perth, as well as with the rig personnel.

When the time came for the fluid to be used in the wells, the results bore out what the lab testing had shown: 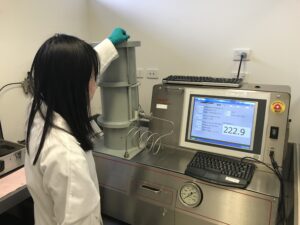 A high-pressure variable temperature viscometer was used to evaluate the rheology profile necessary to navigate the tight drilling window. The use of high-pressure rheology measurements is critical to the design phase of non-aqueous drilling fluids due to the compressible nature of the base fluid.

The team used a risk-based engineering approach, which considered the drilling rates and the various fluids’ chemical and physical attributes that minimize both static and dynamic circulation pressures in a deepwater horizontal wellbore. High-pressure, high-temperature (HPHT) fluid testing and hydraulics modeling quantified the benefit of aqueous and non-aqueous-based solutions. For the non-aqueous fluids, the team considered a variety of conventional, low-ECD and flat-rheology variations in terms of stability, cuttings transport efficiency and ECD.

Between the temperature differential from the deepwater seafloor to the bit and the narrow fracture gradient window caused by reduced overburden or depleted reservoirs, designing a deepwater drilling fluid with optimized rheological properties proved to be the answer to this challenge.

A deepwater drilling fluid must have sufficient low-end rheologies to provide hole cleaning and barite suspension at high bottomhole temperatures near the bit, and a sufficiently low gel strength to break to resume circulation in the cold-temperature environment of the riser near the sea floor. In addition, a thinner fluid will reduce pressure losses and optimize flow rates, allowing for increased rates of penetration, faster tripping and reduced spike in ECD.

The project was accomplished without nonproductive time (NPT). The fluid was able to stay within the narrow margin while maintaining 100% cuttings transport efficiency. Even though barite sag is often an issue related to low-density fluids in high-angle wells, density fluctuations did not occur on either surface or downhole measurements.

The flat-rheology fluid improved the cuttings transport and minimized the frictional pressure losses in the well. The novel emulsifier and rheology modifier package allowed for a low gel structure under the static conditions, and sufficient rheology to transport the cuttings independent of the wide range of temperatures the fluid was exposed to in dynamic conditions. DC