Newpark Drilling Fluids partnered with Hart Energy and the Boot Campaign to present a $5,000 gift certificate to Bo Reichenbach, a 24-year-old SO2 Navy SEAL wounded while serving our country in Afghanistan. John Beltz, Director of Marketing for Newpark Drilling Fluids (pictured second from far right), was on hand to present the certificate at Hart Energy’s DUG (Developing Unconventional Gas) Eagle Ford conference in September.

As a Navy SEAL, Bo was entrusted with some of the most dangerous missions in the military, and in 2012 his unit was deployed to Afghanistan. Bo was critically injured by an improvised explosive device in July, 2012, and was awarded the Purple Heart just two days after arriving back to the US. He has undergone over 20 medical procedures since then, and continues to conquer his path of recovery each and every day. Bo’s family is by his side as he undergoes extensive rehabilitation in Maryland. Bo recently told his father, "I don't want anyone to feel sorry for me. God has me on a new path and I'm excited for this new adventure."

In addition to the gift certificate from Newpark Drilling Fluids, Bo and his family were presented a key to their new house donated by Hart Energy and the Boot Campaign.

Newpark Drilling Fluids is committed to honoring our Wounded Warriors. This is the second year Newpark recognized a decorated Wounded Warrior at the DUG Eagle Ford Conference. 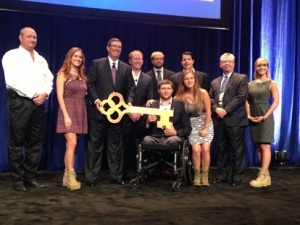 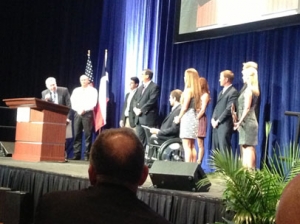